Surface Dressing Kendal is a quick and effective way of giving a new lease of life to a tarmac surface that is beginning to show signs of fatigue and wear. The driveway or road is repaired with tarmac patching, made level with pre’ surface dressing patching and then a full top layer of K170 hot premium bitumen is sprayed onto the tarmac surface quickly followed by high quality, local hardstone chipping. It is then rolled to ensure proper embedment of the aggregate into the bitumen binder. This provides an economical and water impervious layer with the added benefit of pothole prevention and a much-improved surface texture wich provides increased skid resistance properties ensuring tarmac driveways Kendal is sealed from any further deterioration

Surface dressing Kendal is applied by custom built bitumen sprayer and aggregate spreader and It can be used to treat both, driveways, estate and farm roads in Cumbria. The rate of application of materials is essential to ensure adequate performance. The cost of surface dressing is a lot less than tarmac resurfacing Kendal or asphalt surfacing Cumbria making it a cost effective solution. We will be happy to provide a free no obligation site survey and quotation.

Tarmac driveways in Kendal has been around since the 1830 and is very common among homeowners as it is mainly relatively cost effective and cheaper to maintain than many other of its counterparts. It can be used on many domestic, commercial agricultural and industrial areas, it can be machine or hand laid with it’s added benefits of being very hard wearing and low maintenance. Tarmacadam driveways Kendal has improved massively in recent years becoming stronger and more flexible, especially heavy duty materials being used on projects. These are suitable for heavy traffic areas such as driveways, private/residential roads, business premises, car parks, Farm roads, factory forecourts etc.

Where can Tarmac Kendal Cumbria be used?

What will we do?

It all depends on the existing surface for example if you have an old tarmac driveways in Kendal which is in very bad condition, cracked, potholed etc the existing surface would be completely removed. Then we would use a solid base to build up the driveway to a necessary level which then would be compacted. We can then coat the area with a tack coat bitumen to help bond the base and the newly laid product together. Finally we would re-surface using a grade of tarmacadam Kendal to suit which would then be power rolled until we reach an even consolidated area. We can then seal the edges with bitumen to stop water ingress on the joints. 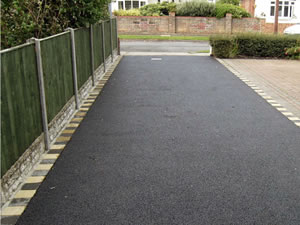 HOW MUCH DOES A TARMAC DRIVEWAYS COST IN KENDAL?

Tarmac driveways costs can vary depending on a number of circumstances:

1. The size of your driveway

3. The age of the current driveway

5. The style of surface & edging required

The best way top get an accurate price for tarmacadam driveway is to give our Kendal driveway contractors a call for a free, no obligation site survey and quotation.

Driveway contractor near Kendal at M. Miller we are very confident in the quality of our Kendal Driveways, which is why we offer a guarantee on all Driveway works.
We also try to match prices offered by our trusted competitors, so If you find a cheaper quote from any other tarmacadam driveway company near Kendal and Cumbria, just give us a call and we’ll try to match or even beat it!
Send us your details & we’ll call you back with a driveway quote.

NOT IN CUMBRIA? STILL NEED A TARMAC COMPANY?